Where are the kissing bugs?

That was the question that started everything 11 years ago when a group of researchers came to Arequipa, Peru from both the US and Lima to observe first hand the urbanization of Chagas disease and its insect vector (both historically rural). Since then, many achievements have been made including successful and coordinated control of the disease in collaboration with the Ministry of Health, the establishment of a strong team of local investigators, and the expansion of the research group's approaches and topics from epidemiology to ecology to behavioral economics and from Chagas disease to liver fluke infection to canine rabies.

Many times science is only shared through academic papers without much communication with policymakers and the general public. This blog aims to be a medium to connect our team with the scientific and nonscientific community about zoonotic diseases in southern Peru. 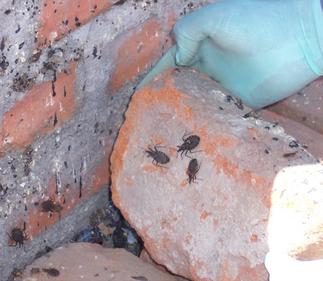 A Brief, Recent History of Control of Urban Chagas Disease in Arequipa, Peru

In 2001 an infant died of acute Chagas disease in the district of Jacobo Hunter, Arequipa Peru. The death kindled efforts to control the disease in the city, and a door-to-door insecticide application campaign was initiated to eliminate triatomine bugs from Hunter in 2003. At its onset, the campaign counted with technical support from PAHO and financial support from the Canadian International Development Agency (CIDA). I arrived in Arequipa in 2004, by then the campaign was in the district of Tiabaya, a much more infested district at the southwestern outskirts of the city. We finished treating Tiabaya in 2005, and the campaign circled back, counterclockwise through the city—for those familiar with the geography: to Socabaya, JLByR, Paucarpata (we hit one of our many snags halfway through Paucarpata, and the district was not completed until 2009), Mariano Melgar (another delay, and the district wasn’t treated until 2011). From Melgar we jumped forward to Cayma, then circled back to treat Miraflores and Alta Selva Alegre. In the districts on the north of the city the infestation rates have steadily declined, and the parasite Trypanosoma cruzi, has become a very rare sight. Now, in 2016, we are embarking on treatment of Cerro Colorado. Cerro Colorado is huge, and the vectors are scarce. So far we have detected only a dozen or so foci of infestation, none larger than a couple city blocks.

As the ‘attack’ phase of the campaign draws towards completion the Herculean task of the ‘vigilancia’ phase grows. We now must monitor some 140,000 households to ensure the insects are not allowed to return and undo the immense accomplishments of the past twelve years.